The Little Houston Quarry in the Black Hills of Wyoming contains the most diverse vertebrate fauna in the Morrison Formation (Upper Jurassic) north of Como Bluff and the second-most diverse in the entire formation, after Reed’s Quarry 9. The deposit was an occasionally reactivated abandoned river channel, in interbedded green mudstone and laminated green-gray siltstone above a channel sandstone. The dinosaur material is densely distributed and is disarticulated to articulated, with several associated skeletons. The biota contains charophytes, horsetails, a possible seed fern, possible conifers, gastropods, two types of unionoid bivalves, diplostracans (“conchostracans”), a malacostracan, ray-finned fish, lungfish, a frog, salamanders, two types of turtles, rhynchocephalians, a lizard, choristoderes, two types of crocodyliforms, a pterosaur, Allosaurus and several types of small theropods including Tanycolagreus? and probable dromaeosaurids, numerous Camarasaurus and a diplodocine sauropod, a stegosaur, the neornithischian Nanosaurus, and the mammals Docodon, Amblotherium, and a multituberculate. Among these taxa, one of the unionoid bivalves, an atoposaurid crocodyliform, and the species of Amblotherium, which appear to be new and unique to the locality so far. The Docodon material may represent the first occurrence of D. apoxys outside of its type area in Colorado. Additionally, small, unusual theropod tooth types reported here may represent the first Late Jurassic occurrence of cf. Richardoestesia in North America and a possible abelisauroid, respectively. 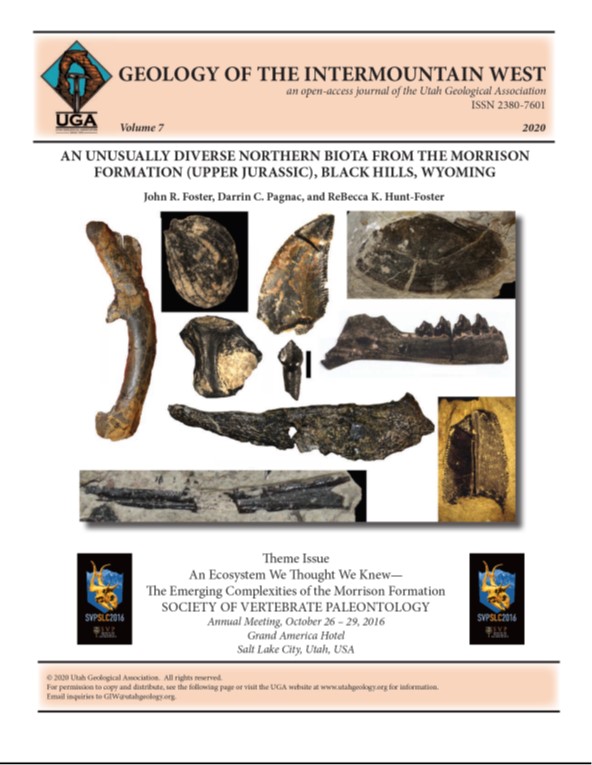